Let the people of Takoradi, Tarkwa and Cape Coast pray because What I Saw was Scary: Nigel Gaisie

Prophet Nigel Gaisie, the General Overseer of Prophetic Hill Church, has revealed a prophecy about Ghana and other neighboring countries.

In a post on his official Facebook page, the man of God recounted what he witnessed in a revelation. He said that the entire planet was in tears.

A huge storm, according to the man of God, blew away people’s houses and lives, leaving them without refuge.

He went on to say that he saw fires that destroyed people’s homes, lives, and structures.

“I went into a deep sleep and the Spirit of the Lord lifted my spirit. In my vision, I saw the world cry. A great storm blew, properties and lives were lost in many parts of the world.”

“People were left without shelter. The Lord lifted my spirit and in my vision, I saw fire destroying properties, homes, lives, and buildings collapse.’

He added that “The Lord carried my Spirit man into the Northern part of Umiofia and I saw a protest, a spine-chilling accident, and robbery attack on travelers.”

“Let the people of the Central region, Takoradi, Tarkwa, and cape coast pray against natural disasters and accidents which’ll take lives away.”

“Let the people of *Kwahu* in Umuafia pray against kidnapping. A cry from the NORTH.”

“In my vision, I saw a world leader say bye-bye to us and a west African presidency under attack, let Nigerians pray more for Aso Rock.”

“Let the world pray, 2022 year is a year of Growth but the enemy will contend against it but victory will finally be Ours in Jesus Christ’s name, AMEN,” he ended. 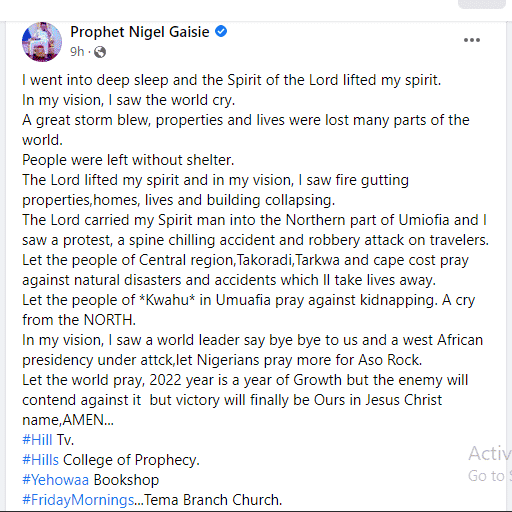